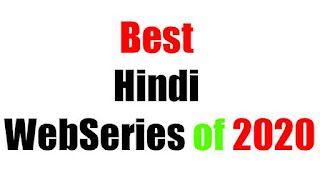 So, we have listed some of our Best Hindi webseries 2020, which is definitely important for you.

Paatal Lok is an one of Best web series that was released on 15 May 2020 in Amazon Prime. It is a crime action series and one of the best Indian series of 2020.You can use Amzon prime to watch Paatal Lok online.

Asur is an one of best web series that was released on 2 March 2020. Arshad Warsi and Barun Sobti are the main characters in this series.You can use Voot to watch Asur online.

Special Ops is an Indian espionage thriller series, co-directed by Neeraj Pandey and Shivam Nair. This series was released on 14 March 2020.You can use Hotstar to watch special ops online.
Also Read:Top 5 Best Hindi Web series on Hotstar

Ek Thi Begum is a best Hindi series based on a true incident that was released on 8 April 2020 in Mx Player. The story depicts a scene from the 80s underworld.You can use Mx player to watch ek Thi Begum online.

Bhaukaal is a Hindi-language crime thriller series, directed by Jatin Satish Wagle. It was released on March 6, 2020 in MX Player. This web series has a total of 10 episodes. You can watch it for free in the MX player.Bhaukaal is one of best Hindi Web series on Mx Player.

Mastaram is a Hindi-language adult series released by Mx Player. Mastram is very much liked by the audience. This series has been given a rating of 7.7 by IMDb. This is one of the best Hindi webseries of Mx Player.

Aarya is an action crime thriller Hindi Web series in which Susmita Sen and Chandar Singh are playing the lead roles. You can see this series in Hotstar. It is one of the best Hindi web series of Hot Star in 2020.

Breathe Into the Shadows

State Of Siege :26/11 is a Hindi crime action Thriller web Television series directed by Matthew Leutwyler.Arjan Bajwa, Arjun Bijlani, Mukul Dev are in the lead role.You can watch this web series on Zee5.

The Forgotten Army – Azaadi Ke Liye is one of best Hindi web series.The series is directed by Kabir Khan, the series is based on true events about the men and women in the Indian National Army (INA) led by Subhash Chandra Bose.Sunny Kaushal and Sharvari are in the lead role.you can use Amazon Prime Video to watch this web series online.